It was a long rocky season for the Wolfpack after losing several players to tackle. But we all knew, as long as we got better as a team in time for playoffs, we’ll be fine. And that was the case… 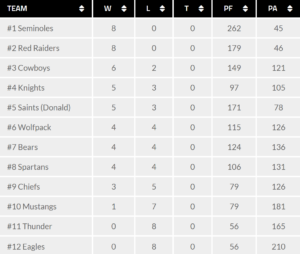 We finished 4-4 only scoring 115 points the whole season. So in order for us to make it to the championship, we’d have to really prove ourselves.

We ended up scoring almost as many points in the playoffs as we did in the whole season! Our newly formed team finally found their synergy and finished strong, shutting out the #1 team in the championship game.

We are so proud of our boys and the effort they gave all season long. It paid off! Looking forward to a stronger Spring season!

Now, back to tournaments… 🙂